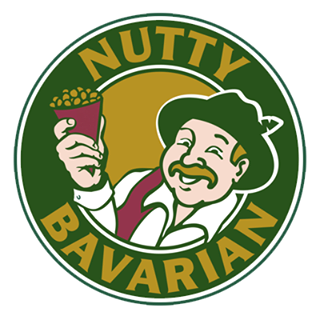 Advised by a very wise man, who happened to be my father, “That you can learn something from everyone if you take the time to listen.”  That statement really applied when I sat down with David Thrasher and learned about this tasty business. When I heard of David Thrasher’s new business a few years ago I thought it was a “Catchy & Fun” name.  However, there is a lot to a name and David is one of 2,000 licensees for the “Nutty Bavarian” worldwide. The company headquarters is in Sanford Florida and was founded by David Brent, who worked for NASA as an aeronautical engineer before purchasing The Nutty Bavarian in 1994.

In a nutshell, no pun intended! The story begins with Bruno who was born in 1891 in Footfurt, Germany.  Footfurt is a small village nestled in the Bavarian hills.  Its inhabitants are famous for their good nature and love of good food. Bruno the Bavarian was the fifth son of the town baker, Wilhelm. His family made wonderful bread, cakes, and cookies.  Bruno was a “think outside the box” kind of guy and was always trying new recipes.  He happened to love nuts and invented a cinnamon glazed coating, which went over well during the Annual Octoberfest. This he decided was his destiny and The Nutty Bavarian still uses the same recipe developed by Bruno in Bavaria.  They hope that it gives you the same pleasure enjoyed by the citizens of Footfurt for over a hundred years.

Look for or follow your nose to the delicious smells coming from David’s booth at our local Chamber events, as he has participated in both Truman Day & Wyatt Earp FallFest. He joined the Chamber to receive discounted booth space but has taken advantage of our other marketing platforms such as channel 3, Facebook and cross-sharing when he sells directly to customers at Lamar High School football and Basketball games. David does a lot of fundraising for school groups; Senior Class, Cross Country, and Show Choir are some that have benefited from selling his product.  He has also provided product for churches and businesses to give their customer’s for appreciation gifts.

So what is in the future for Thrasher’s Nutty Bavarian?  He would expand by taking his cinnamon glazed cashews, almonds & pecans to larger markets.  He looks forward to keeping the business for years to come and believes it will be a good revenue stream and fun activity to continue into retirement.  If you would like to follow David’s business follow him on Facebook at https://www.facebook.com/thrashersnuttybavarian/  to book a private fundraiser contact David at (417) 489-NUTS (6887) or by email thrashersnuttyb@gmail.com